Case Study of a Changing World: 1

If we could go back in time, everyone’s priority would be to prevent these acts of terrorism from happening in the first place. The purpose of this article is to demonstrate how Safe Journey is now able to provide financial protection.

In developing Safe Journey, we did extensive research on the numerous terrorist events that have happened, we looked in detail at how these events affected not just the people directly involved at the time, but also those indirectly affected too.

We looked at the numerous insurance claims that were notified, some settled and some unfortunately not, expenses that travellers were exposed to, and other broader requirements that travellers experienced following these real life terrorism incidents, and we wanted to share with you how in these instances Safe Journey could have helped to soften the financial impact… 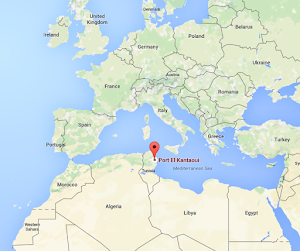 A gunman opened fire on beachgoers in one of the most shocking acts of terror in recent years, killing 38 and injuring many more. 30 of those killed were British.

Of the actual claims we looked at in detail:

Many travel insurance policies did not cover terrorism (and still don’t) and as a result, a number of claims were not paid. This is an example of some of the claims that were not settled. 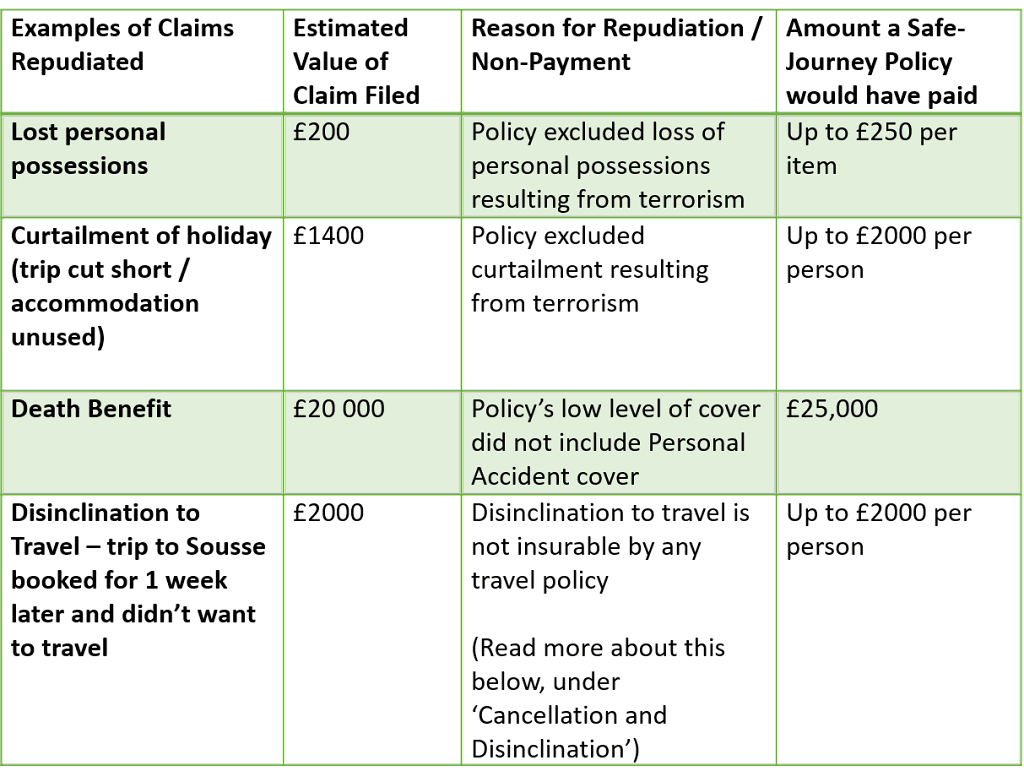 Safe Journey has been specially developed to provide cover in case of an act of terrorism, so you can plan your travel with additional financial peace of mind.

Safe Journey is the first policy of its kind to provide financial protection just for acts of terrorism. Included within Safe Journey is the opportunity to decide not to travel if your destination is affected by terrorism, and for you to curtail your trip and return home early - if your accommodation is within 40 miles of the location of the incident.

In Detail: how Safe Journey would work for different travellers

Cost of all-inclusive holiday, including flights:  £1780

Fortunately, Sean and Theresa were not yet in Tunisia when the attack took place, but they had booked a hotel in Sousse just a few miles from where the shooting took place, and were set to depart two days after the attack. Understandably, they didn’t want to go.

The airline and hotel they had booked with wouldn’t provide a refund as they were inundated with similar requests. At the point that they were due to travel the UK Foreign and Commonwealth Office had not changed their travel advice to an Amber warning - which means one should travel only if it is essential to do so. This advice, when given, means that travel operators are required to allow their passengers to make alternative arrangements or to provide a refund.

“Disinclination” is simply another way of saying “I’m not keen to go there right now."

We believe that you should have the right to cancel a trip if an act of terrorism takes place within 40 miles of your booked accommodation, up to 42 days prior to your planned departure.

Couple (Tim and Mary) aged 62, booked a 10 day trip with a well known Tour Operator who was also an airline company.

Cost of all inclusive holiday, including flights:  £2400

Tim and Mary were on the second day of their holiday when the attack happened, and whilst they were nearby (their hotel was less than 40 miles away from the location of the attack) they didn’t see anything happening and their hotel was not directly affected. Both felt uncomfortable about staying there and wanted to come home. Their Tour Operator was offering to get them home on the next available flight (which they also operated) and so 2 days later Tim and Mary were safely back in Manchester.

If Sean and Theresa (see scenario 1) had been in Tim and Mary’s position, they would not have had a Tour Operator to help them. As their accommodation was within 40 miles of where the attack took place, Safe Journey would have arranged their flights home and paid for them.

They were on the beach during the attack and were both injured. An ambulance took them to the nearest local hospital, after which they were repatriated to the UK. Their suitcases were sent back with them, but their handbags and other items that they had with them on the beach that day, worth approximately £300 each, were not recovered.

Safe Journey would have covered the loss of their personal possessions and the curtailment of their trip. It would also have paid for their medical and repatriation expenses.

Seven people were seriously injured in the attack. Had these injuries resulted in their permanent inability to attend to a profession, business or gainful occupation of any kind, Safe Journey would have covered them for Permanent Total Disability under Personal Accident, and would have paid £100,000 per person.

We should point out that Travel Insurance is not designed to perform in the same way life insurance would - with high sums insured - and travel insurance policies therefore provide a much lower level of cover.

In the case of death, Safe Journey would have paid Death Benefit of £25,000 as well as repatriation of mortal remains or funeral expenses in Tunisia of up to £3,500

Travellers appear not to have experienced any delays as a result of this attack in Sousse, but had this happened, Safe Journey would have provided Travel Delay cover for outbound or return journeys.

Travel Delay Cover would have paid £20 for each 8-hour period of delay, up to £200 per person. If someone had been delayed for 48 hours on their outbound journey and had decided to cancel their trip, Safe Journey’s cancellation cover would then have applied.

Emma and Sharon (scenario 4) would have been covered for their emergency medical expenses in Tunisia (ambulance and treatment at the local hospital).

Safe Journey would also have paid for medical repatriation, estimated at £20,000 for two people, leaving them able to focus on their recovery without additional financial concerns.

Get your quote today and make your journey a Safe Journey.

Please note: The information provided is a summary only and does not contain the full terms and conditions of the contract. Full terms, conditions, complaint procedures and exclusions can be found in the Policy Wording, which you should also read carefully.